Describing Florence's places of interest means describing the city's history. The historic centre, a UNESCO World Heritage site, is an open-air museum where you can admire the facades of the awe-inspiring basilicas and cathedrals that form its unmistakable skyline, and see the lavish palaces that tell the story of the different periods of the city's history: from the birthplace of the Renaissance to the capital of Italy, all the way through to the first half of the twentieth century when Florence became a hub for the avant-garde.

When you visit Florence's museums and see the works housed in them, you are not just delving into the history of a city and its treasures. Rather, you are acknowledging the cultural imaginary that has contributed to the creation of Western civilisation as we know it, laying the foundations for the aesthetic, educational, scientific, culinary, political and artistic principles that surround us today.

Thanks to the foresight of the last representative of the House of Medici, Anna Maria Luisa, who ensured that the fall of a dynasty did not bring about the death of Florence's culture, the city now preserves its heritage in a vast network of museums, where a constant process of restoration, preservation and renovation aims to establish Florence as the art and history capital of the world.

The inestimable historical and artistic value of the Uffizi Gallery, the Accademia Gallery, the Bargello National Museum, Palazzo Pitti and the Medici Chapels sits alongside buildings that examine more recent history, such as the Museo Novecento and the temporary exhibitions at Forte di Belvedere and Palazzo Strozzi. The choices on offer range from Palazzo Vecchio, a museum and still the centre of administrative power even today, to the more recent scientific, academic and fashion museums.

Listing the great artists and masterpieces housed in the museums that preserve Florence's immense heritage would perhaps be redundant given their fame. However, admiring this vast treasure trove certainly is not - this heritage belongs not only to Florence, but to humanity as a whole. It is our history, preserved and accessible to all.

Moreover to fully appreciate the artistic richness of Florence, one must also look beyond the city centre: the area “outside the walls” has a lot of original "jewels": Museo del Cenacolo di san Salvi; Museo Stibbert; Parco di Villa il Ventaglio; the Medici Villas of Petraia and Castello, the Villa La Quiete and that of Poggio Imperiale.

The surroundings made of verdant hills spotted with parish churches and villas hides a lot of unknown masterpieces.

The territory has an incredible legacy; the Medici and various affluent merchant families left many traces of their presence there over the centuries, and there is an abundance of religious art.

The property is 300 m from Florence Cathedral

Only 400 m from the Ponte Vecchio

A mix of classic design and modern facilities

This hotel is 30 m from the Ponte Vecchio bridge

Panoramic views of Florence and the Arno River 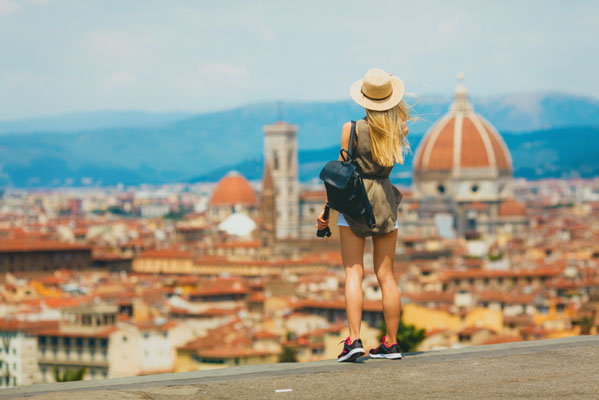 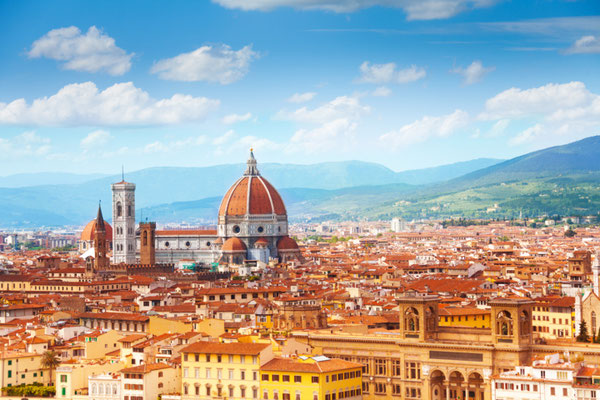 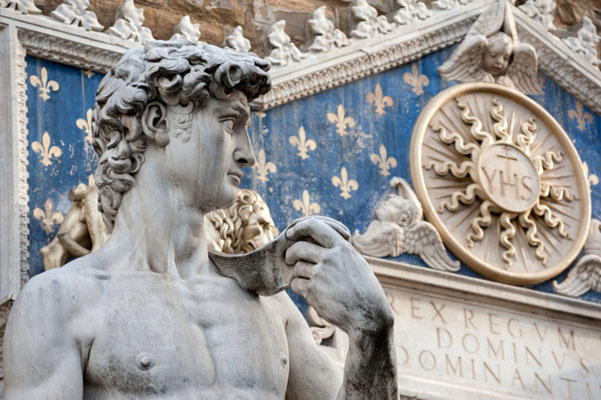 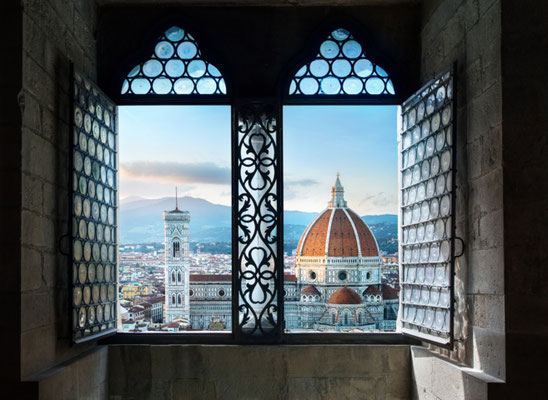 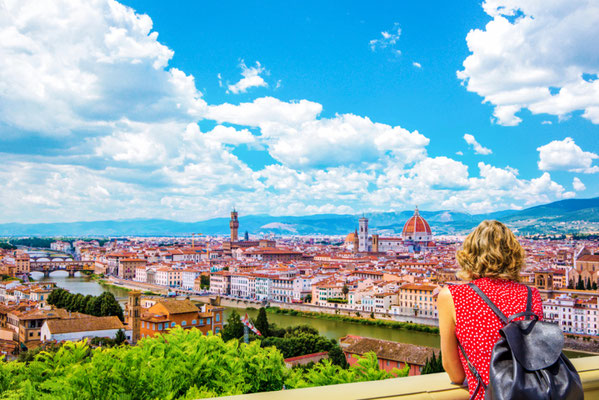 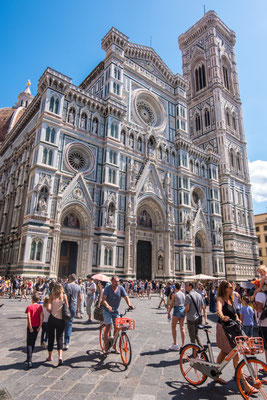 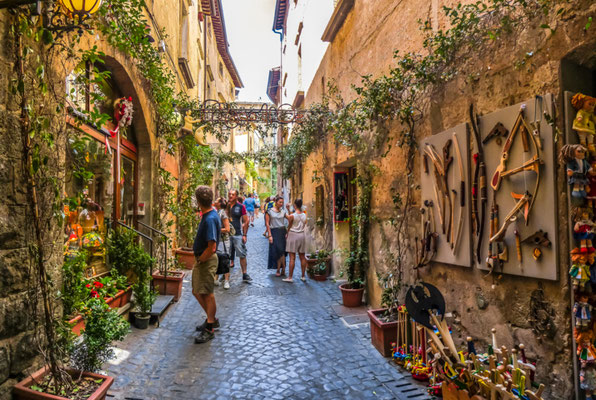 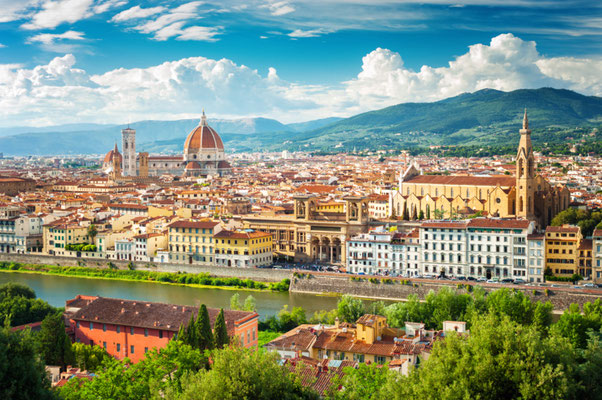 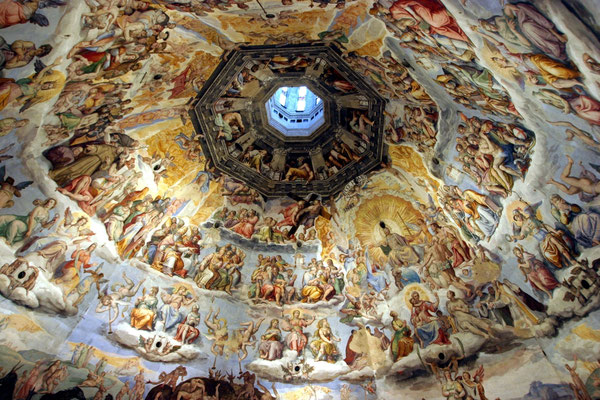 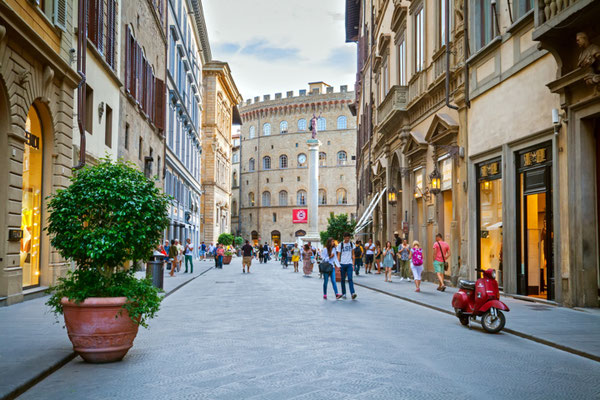 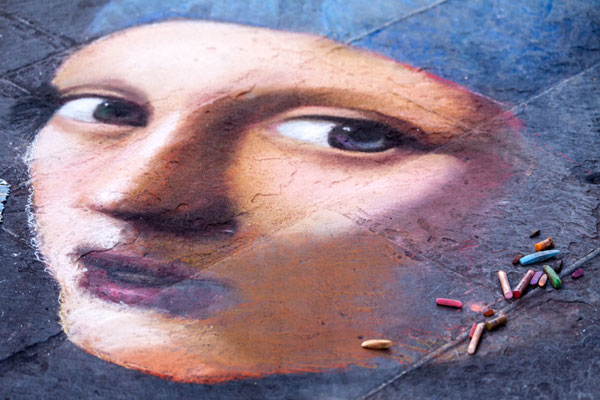 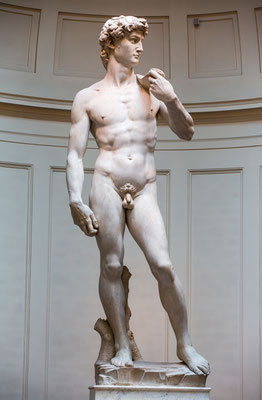 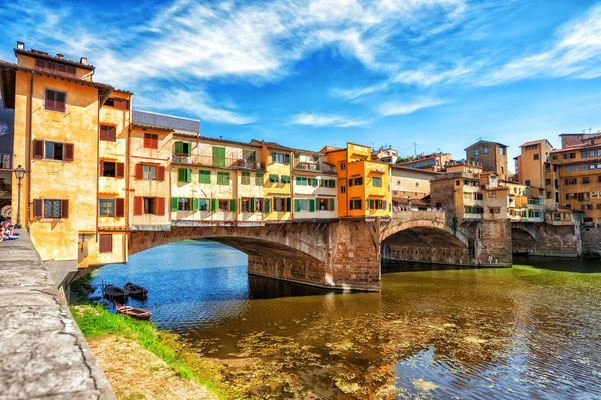 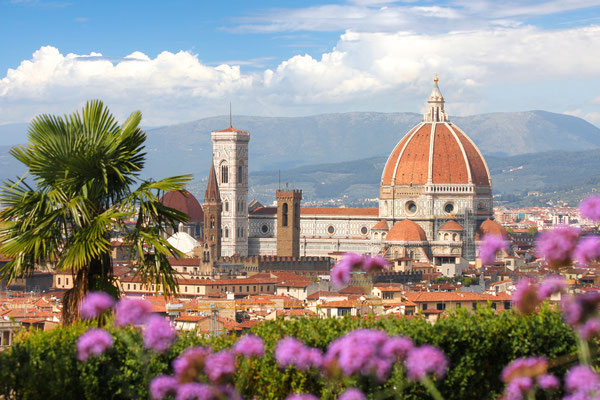 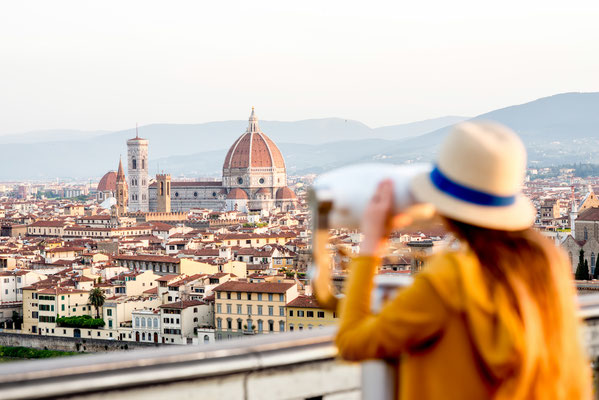 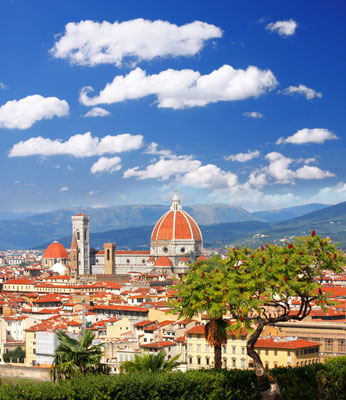 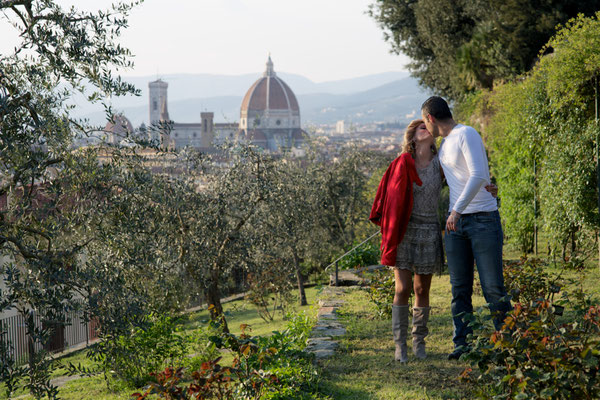 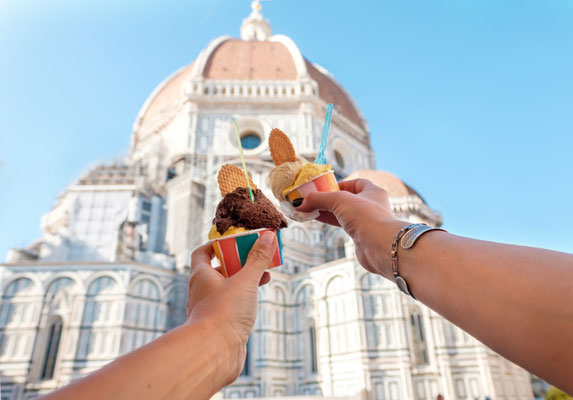 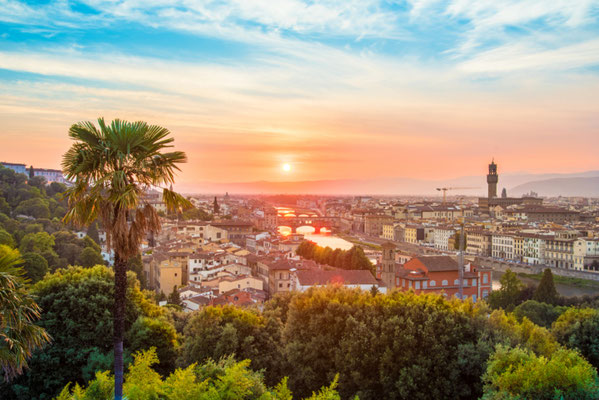 The historic centre of Florence contains such a wealth of masterpieces that it is difficult to separate the city from its art works. In 1982 it was declared a World Heritage Site by UNESCO, the motivation being that it encapsulates the whole history of the city, from the ‘Roman quadrilateral’ in the Piazza della Repubblica area to the narrow streets of the medieval city, the splendours of the 16th-century Pitti Palace and the changes wrought at the time when Florence was capital of Italy.

The density of such a fabulously rich legacy – historic and artistic but also scientific and naturalistic – in a small, well-defined space makes Florence city centre quite unique, not only in the eyes of the curious visitor but also in those of scholars and local people. With its extraordinarily beautiful churches, its museums and art collections, historic gardens, piazzas, streets and ancient palaces, Florence can justifiably be defined as an “open-air museum” – not simply a container for art works but a work of art in its own right.

Florence in the low season

Florence is an art city and visitors from all over the world come to visit it all year long. Undoubtedly we can say that wintertime, except for Christmas time, is low season and a very good time to visit Florence. In this handful of months, though they can be wet and windy, the city offers its best in terms of services, with lower prices, sporadic lines in front of the main attractions and a lot of events.

Every winter for the last few years, from the beginning of December to Christmas, Florence has been illuminated  by “F-Light", the Festival of Lights, which bathes the monuments and squares of the city with a new light. The event, spread out in more than 15 locations, proposes video-mapping, projections, games of light, art installations.

The city's towers are an extraordinary option for those seeking a different perspective.

Torre di Arnolfo, the jewel in the crown of the Palazzo Vecchio, stretches toward the sky like a pointing finger. This monument is open all year round. As it towers above the building itself, the climb will quite literally take your breath away, but the unforgettable view of the city is worth it ten times over.

Alternatively, try the two former guard towers, San Niccolò and della Zecca. They now stand alone as the remains of the old city walls, which were demolished in the late nineteenth century, and allow you to enjoy unusual views of the city. They are open during summer for guided tours or accompanied visits.

Torre San Niccolò is the only one of the city's old gates whose height has never been reduced. Once you conquer its 160 steps, you can enjoy a 360-degree view of Florence from the left bank of the River Arno. The name of Torre della Zecca, on the right bank of the river, commemorates the tower's erstwhile function as the place where Florence's coins were minted using hammers powered by the water flowing past.

And of course, we can’t forget the truly stunning panoramas offered by Brunelleschi's Dome and the Cathedral's bell tower (or Campanile).

The beauty of Florence lies not only in its priceless artistic heritage, but also in its landscape, between its green hills and its splendid parks, where art and nature combine wonderfully to create an indescribable charm.

Niccolò Tribolo, the ''architect of the Medici gardens" was the inventor of the "Italian-style garden". One of his most important creations lies behind Palazzo Pitti: the Boboli Garden. Commissioned by Cosimo I de' Medici, the garden is a veritable outdoor museum, full of statues, large fountains, natural architecture and artificial grottos. Tribolo was also responsible for the Medici gardens at Villa La Petraia and Villa Reale di Castello.

Florence's green lung is undoubtedly the immense Cascine Park, with 160 hectares which stretch for over 3 km along the right bank of the Arno. Today, it is the perfect spot for those who want to play sports, enjoy the greenery, or attend major events, especially in summer. At the entrance there is a visitor centre where you can learn more about the features of the park and the events being held there.

On the other side of the city, running along the opposite bank of the Arno, we find the large “Parco dell’Albereta e dell’Anconella”, where you can run, walk or ride your bicycle.

A stone's throw from Piazzale Michelangelo lie the Rose Garden (with 350 types of rose and sculptures by the Belgian artist Jean-Michel Folon), and the Iris Garden (home of a prestigious international competition). The Orticultura Garden has a nineteenth-century feel, characterised by the greenhouse/tepidarium by Giacomo Roster (a magnificent structure made of iron and glass), as does the park at Villa Stibbert, designed in line with the eclectic tastes of the owner and avid collector, Frederick Stibbert.

Florence is full of private monumental gardens whose presence is hinted at by tree tops towering above perimeter walls. The Torrigiani Garden is the largest private garden in Florence, designed in the Romantic style in the nineteenth century, while the Corsini al Prato Garden hosts the event "Artigianato e Palazzo".

Just outside Florence, we find the ever-popular Garden of Villa Gamberaia, set amongst the stunning landscape of Settignano.

You only have to choose in our area: towns of Etruscan origin such as Fiesole, towns surrounded by Renaissance walls such as Lastra a Signa or Figline Valdarno. Wine production areas such as Rufina, Pontassieve, Pelago. Typical manufactoring centers: Impruneta for cotto, Signa for straw; Sesto Fiorentino for ceramics.

Some towns are on the slopes of the Apeninnes - Reggello, Vaglia, Londa; other lie along the Arno valley - Rignano and Incisa. Other towns are suburbs of Florence- close to the city but with a more quiet rythm of life, such as Bagno a Ripoli, Calenzano, Campi Bisenzio and Scandicci.

Any of these places are a part of the territory around Florence, where you can stay and enjoy both the city and the beauty of nature, Italian lifestyle and food.